editorial mistake or a snub? 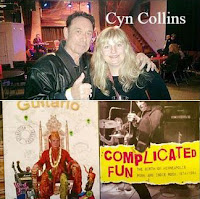 Arlo Hennings offers kudos to Cyn Collin’s book “Complicated Fun” (Minnesota Historical Society Press, 2017). One reviewer wrote: "If you were alive in Minneapolis, you need this book.", that is accurate." There’s a minor discrepancy when it comes to one part of its accuracy. Rock 'n' roll is often based on bloopers and “he said she said” innuendo so my essay is not a condemnation. However, this is for the record, Minneapolis Music History, so I feel my essay is warranted for the sake of fact. I do not know Collin’s personally. Hennings's old musician friend Wayne Hasti informed him that she was putting together a book about the Longhorn.

Hennings contacted Collins via email and to be perfectly honest she wasn’t too interested in what he had to say about the Longhorn. He performed the Longhorn starting in 1979 and new quite a bit about it. He gathered because she didn’t know who he was and not a celebrity during her timeframe that his stories wouldn’t be included. He wasn’t too broken up about it. Many other stories were cut too. As an author myself, I’d like to include everything in my books too but there’s only a limited amount of pages.

This is the correct story of the Tsetse Flies.

Collins wrote several paragraphs in her book about the local popular band, The Suburbs and the history in question was about the “pre-Suburbs” band called the Tsetse Flies. What was printed in her book is inaccurate. The truth of how it was is as follows:

Even though Collins was made aware by Hennings, and he also asked Chris Osgood who saw Hennings with the Flies to talk to Collins, and fellow Flies members Hugo Klares, and Michael Halliday to correct her story it didn’t happen. Collins maintains Hugo and Michael didn’t remember Hennings? That simply cannot be true for a number of reasons. It appears someone either on purpose wanted to exclude him from the story or Collin's perhaps didn't want to spend the time on it?

In 1977, Hennings was introduced by Steve Knaeble (roommate and co-originator of Hennings's future band Vitamin Q) to a visionary guitarist named Bruce Allen. The short, self-effacing, MCAD art student was starting a punk band he dubbed the “Tsetse Flies.” At the time, Hennings was Hugo Klares' roommate. Hugo was friends of Bruce Allen (RIP) and Michael Halliday. Hennings was asked to join the group as the rhythm guitarist. The line-up at that time consisted of Bruce Allen, (lead guitar/vocals), Michael Halliday, (bass) Hugo (Huck) Klaers, (drums) and Hennings, rhythm guitar. They practiced in the living room and basement of a house rented at 3545 Minnehaha Ave for about 6 months, not Podanys. The Podany’s space thing as stated in Collin's book “Complicated Fun” happened much later. Checking on their progression now and then was Bruce Allen's friend, Chris Osgood.  At the time Hugo and Michael worked at Pracna & Main, Hennings did odd jobs, and he can’t remember exactly where Bruce worked only that it was graphic art.

When is a band? The Flies never performed live or recorded, but the songs they jammed on were penned by Bruce Allen. Hennings wrote one of them down called “Do Right,” which he taught to his next band Vitamin Q and performed his version of it to Bruce’s liking at the Longhorn in 1979. During Hennings short-lived stint with the Flies, Bruce asked him to leave the band and later Steve Knaeble’s brother, Johnny Knaeble, might have jammed on guitar with them for a short while before Hugo left for California.

Hennings has the deepest respect for Bruce Allen and for what the guys went on to accomplish.
The song "Do Right" written by Bruce Allen during the Tsetse Flies.

For more information about Arlo Hennings check out his biography

This disclaimer informs readers that the views, thoughts, and opinions expressed in the text belong solely to the author, and not necessarily to the author’s employer, organization, web site ISP, search engines, committee or other group or individual.