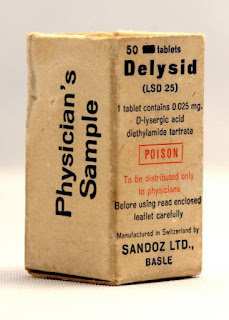 LSD, or lysergic acid diethylamide, is a hallucinogenic drug that was first synthesized by a Swiss scientist in the 1930s. During the Cold War, the CIA conducted clandestine experiments with LSD (and other drugs) for mind control, information gathering and other purposes. Over time, the drug became a symbol of the 1960s counterculture.

Authors, such as Ken Kesey, “One Flew Over the Cuckoo Nest,” Tom Robbins, “Tibetan Peach Pie,” Tom Wolfe, “Electric Kool-Aid Acid Test,” Aldous Huxley, “Doors of Perception,” Timothy Leary, (Evangelist), musicians and other artists too many to name used LSD. In the mix were cults like Charles Manson too. Many have attempted to varying degrees of success to describe what effect LSD had. But, one thing is for certain the drug had a profound and life-altering effect on them.

Somewhere along with the great pop culture highway pure LSD, like many counter-culture trends, fell to the wayside and the enlightenment tribe morphed into other things. This essay is not a history lesson but as a practitioner, between the ages of 15-16, I dropped large amounts of LSD.

After taking LSD, I became a voracious reader, which inspired me to be a writer and a musician, which inspired me to write and promote music. However, on the downside, it alienated me from the mainstream and promoted the idea of dropping out. In addition, my visions prompted me to believe that I knew something beyond the mortal. Maybe I had gone where no man had gone before but there wasn't a place for acid heads in my hardscrabble life.

I had tried many variations of LSD to fewer results namely purple haze, microdot, windowpane, orange sunshine, and 3-way wedge, which I place in the hallucinogenic class, not the DIY Shaman kit. I tripped so many times, in fact, that I grew weary of the predictable quest arc. How many times could I witness my mind leaving my body and my ego dissolve like Alka-Seltzer until I admitted, I'm not the Buddha and never will unravel the great mystery of my navel? LSD proved to be too much for my young, fragile eggshell mind. A strong psychotropic drug that no one knew little about. Therefore, I didn't need to drop it anymore.

I still wonder what kind of person I might have become if I never experimented with LSD? It changed who I was but to what degree and to put a finger on that I’ve never been able to ascertain. Only that I never looked at things the same way again.

This is my experience through the heavy soil mode of an interstellar washing machine.

The blue square wrapped in Paisley colored tin foil offered me a gateway dream to another dimension of my being — a sort of parallel world as much a part of our reality as the Earth to which we’re temporarily bound — a domain of spirit where the cumbersome physical body cannot function, and where encounters with rabbit holes and other such entities of the imagination are commonplace. It is in that place — where time and distance melt away, and the consciousness of all beings\living or dead, seem to connect where I am in a state of awareness, where I am making sense of the otherwise inexplicable. It is in this realm where the soul maps are hidden away, waiting for a timely moment to reveal their secrets and unveil the path to transformation.

Only LSD was powerful enough to propel me beyond the ego’s gravitational pull and into the inky black nothingness of the dream mind. Like a rocket ship, after the first booster had exhausted its fuel, I’d enter Stage 1, feeling the drift, then into Stage 2, where my vision tapped through the dark illusion of time... and finally, onto Stage 3, where for me, a kind of white-out happened, and I experienced my conscious and unconscious minds merging into a state of blissful surrender in order to go beyond the matrix, and travel to other galaxies, uninhibited by any mortal means.


Interview with a teenage acid head.

“Do you have anything else you’d like to say?” Dr. Elle, the Psychiatrist asked.

“I consider myself a soul traveler. I spend many days hanging out at lakes, woods, and libraries,” I said.

“I take acid to bring me closer to what I believe to be my true nature, which is a hyper-accelerated state of awareness. I called this state of animated consciousness Universal Mind.”

She was not familiar with the LSD culture, nicknamed acid. Most of the facts on the drug were folklore. Illegal since the early 1960s, the popularity of LSD waned during the first half of the 1970s. Research on the long-term effects of the drug remained unknown. She recalled reading an article in Psychology Today magazine about a diagnosed phenomenon, "Post Hallucinogenic Sensory Distortion." The theory concluded that due to an overly excited pituitary gland the patient’s senses absorbed reality like a flash flood as opposed to an eye drop. Resulting in permanent neuron overload, the brain no longer had the ability to absorb external stimuli on a controllable one at a time basis. The mind protected itself by creating a mental condom.

She listened quietly as I told her my body was a translucent, revealing complex of anatomical systems, which was interwoven with glowing energies visible to clairvoyants.

The case took a new turn.

“What is your greatest fear?” She asked.

“To have my head shaved.”

“I believe it was a guitar.”

“The most erogenic part of your body?”

“The bottom of my feet.”

“If I say ‘a man’, what is the first image that comes to your mind?”

“A hairy creature at the bottom of a pool.”

Dr. Elle sat back in her chair and rolled her hair gently into a knot. Three black onyx rings set on sliver covered her long, brown fingers. “Why do you want to be a Universal Man?”

“When your mind left your body, you enter what’s called the Universal Mind to be one with the spirit world,” I answered.

She examined me closely. “Do you believe that you have a Universal Mind?”

“I have a mind-traveling club.” I really acted like it was a confession. “The concept,” I went on, “my friends and I leave our bodies and travel around the cosmos. The ceremony happens around a dinner table with no legs. In the center of the table is a Day-Glo-painted bucket—the large metal trash-burning type. On the wall is a window curtain. But there wasn’t any window. It’s all very symbolic.”

Dr. Elle’s black-plucked eyebrows quivered, and she said in French, then repeated in English. “This is why your bedroom has no furniture? Why you paint poetry on the walls––and according to your records attempted suicide?”

“How often do you leave your body?”

“Oh, maybe once a week, sometimes twice,” I answered. “It depends on whether or not I can get the good stuff­­––.”

I got down on the floor, looked up at the light on the ceiling, and barked like a dog. “My blindness was cured. The bandages had come off and I had seen the real me for the first time. Like that first light at birth, I had reached Universal Mind.”

Dr. Elle looked at me with curiosity at first and realized I was being humorous. My sense of humor she noted was characteristically Midwestern. “What did you find when you reached the Universal Mind?”

I returned to my seat, looking lost. “The vision gained was like trying to hold water in your hands.” I stopped at this point to smell my fingers. “The taste of the journey remains on your fingertips. It’s hard to explain.”

“Who is in your club? And what’s the purpose of the club?” Dr. Elle reluctantly had to move on the hour was nearly over.

“The club consists of the guys from the pad. We’re Universal Men. We’ve transcended purpose. A Universal Man guided us between the melons––our rite of passage.”


While my experience was exceptional, perhaps it can help inform the resurgence of research into the use of psychedelic substances for the treatment of conditions such as addiction, post-traumatic stress disorder (PTSD), depression and anxiety, the researchers believe.

Hennings is the author of “Guitarlo” an award-nominated memoir that includes his experiences living in Minnesota and Indonesia.


This disclaimer informs readers that the views, thoughts, and opinions expressed in the text belong solely to the author, and not necessarily to the author’s employer, organization, web site ISP, search engines, committee or other group or individual.