Adi Wijaya may be known to you for his keyboard work on the album "Chapter One" by the Yogyakarta 'prog--jazz-rock' band, "I Know You Well Miss Clara." For this, Adi Wijaya's first solo album, Adi has recruited Dhimas Baruna (bass) and Andar Prabowo (drums).

Adi has able support from his two cohorts, who both have solo slots, and several friends making cameo appearances.  Raghipta Utama is the guitarist on Monkey: Gabriella Fernandez is the singer on Nocturne, with Adi playing the acoustic piano and melodian; Jay Afrisando plays sax on Requiem.

Both studied English literature at university, which may explain why the track titles are a sequence, a storyline. This album is the soundtrack to that story, a vision of an awakening (Risen), a vision leading to a search (Lost) for life's meaning. Idealism is the key, but along the way, the 'hero' is seduced by temporal temptations (Monkey).


He learns that success on those terms is illusory, and throws the 'monkey' off his back. A period of 'Reflection' on the nature of good versus evil follows, with no resolution. He dreams (Nocturne) of where his journey may be taking him. Ultimately, he realizes when he hears the call of the Ngkiong bird (native to eastern Indonesia), and a harbinger of death, that there can be only one conclusion (Requiem).

Altogether, the music of Railroad Therapy covers a wide sonic canvass, including progressive rock, jazz, gothic psychedelia, and Canterbury. Like the soundtrack to an eyelid movie, the music wraps around the spinal cord intertwining classic Euripides Greek playwriting with Javanese tribal mysticism. 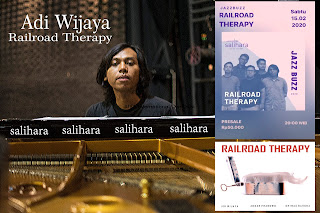